The grape vines are at their least romantic at this time of year, they go into a sort of dormancy, their trunk remains but their leaves fall off and the stems are cut off. The vines will not start flowering or fruiting until the warmer part of the year. But I was reading about the processes that take place for the plant during this time which are arguably just as important as those processes that take place during fruiting. I was specifically reading some of the AWRI literature about the breadth of concerns that apply to the plants all year round. The health and ‘experience’ of the vines (temperature, disease, soil quality) have a major impact on the flavour characteristics of the wines that are discussed in the sensory lab. This is by no means an original idea, and is in fact a very fashionable way of discussing points of differentiation in food products in an industry flooded by choice. I have been trying to explore this idea further by studying the structures and organisms that support the vines, another way of formalising the intangible nature of flavour.

There are some very beautiful old books at the AWRI library that include botanical drawings of grape varieties and their various plant parts; fruit, trunk, seed, leaves etc. It was the seeds that seduced me, when magnified they are considerably different between species, and quite fascinating forms. The seed is a part of the plant that is rarely considered in the wine-making process, neither are the tiny delicate flowers, or the predator insects protecting the plant. These often-unseen elements might be ambiguous or entirely unrecognisable to anyone outside the industry, yet they are exquisite forms.

I am bringing together my own drawings of these small, almost invisible parts of the system, and turning them into a wallpaper. The process of designing digital wallpapers is familiar to me, having produced many different versions for gallery installations (link). For me, wallpapers work as an immersive framework or background, using the decorative as a catalyst to introduce a new set of ideas into the space. Wallpaper will literally and conceptually frame and cross-pollinate other things that exist in the space, which seems like the appropriate medium for this research topic. I often use William Morris designs as a foundation, and bring my own content in, copying his repetitive arrangements. By using this iconic English designer’s work as a foundation I hope to connect the works I make to an English heritage. This is significant for the work as a substantial portion of Australian food culture is derived from English roots (for better or worse), but Morris’s highly popular designs also connect to the idea of ‘good taste’, a phrase with meaning in both food and design industries.

This research and design is still under production, but I thought I would share some of my drawings of seeds and flowers that will likely make up the final artwork. 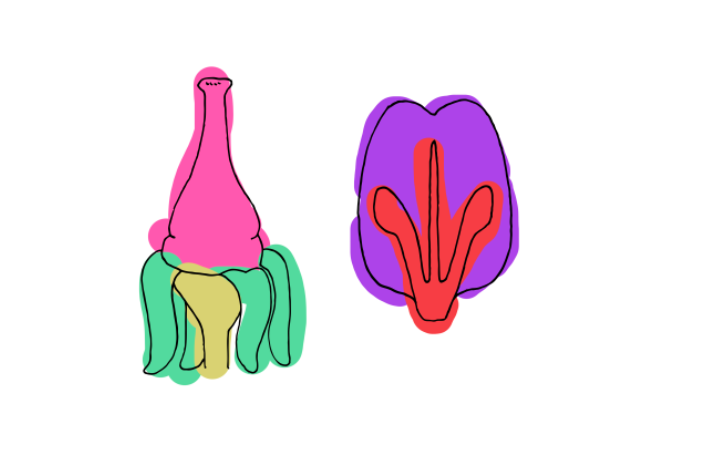